Rich's latest venture is jumping into the art of wall shingling. This is titled "The Giant at The Back Door.

Art Shingles
Posted by TagYerit at 4:55 PM No comments:

We have 3 items to share with you this issue:
"The Trick or Treat Trials"
Latest Pumpkin Carvings
Expansion of the WWTP Museum

1: "The Trick or Treat Trials"
Yup! TagYerit's favorite time of year has rolled around again ... and since Salem, MA is singer-guitarist Flo's hometown, we released a song on our latest CD "Shimmer" about what it was like Trick-Or-Treating in Salem as a child. "The Trick or Treat Trials" details all the heightened anticipation of the big candy-haul night as well as the mysterious disappearance of Flo's cherished stash of chocolates. The Salem News feature the story of this song on their Living Arts page - you can see the article at:
http://www.salemnews.com/lifestyle/x124778329/Singers-latest-song-a-Halloween-treat

2: Latest Pumpkin Carvings
For years, TagYerit has been posting pictures of their elaborate "playing with light" pumpkin carvings. Plus we post the creations of other pumpkin artists who carve, paint, deeply sculpt, stencil and stack 'em. From the super scary to the silly ; to celebs and stories to the scenic ... go go peek at our vast pumpkin galleries at:
http://www.tagyerit.com/pumpkin.htm
You'll find our newest when you click the 2010 link. You can also visit "Songcarvers" which is close to our hearts since it combines our pumpkin carving art with our songwriting. While you listen to the songs, you'll see that song's characters magically appear as the pumpkin carving progresses.

3: Expansion of the WWTP Museum
Also hosted at TagYerit's website is "The Whole World Toilet Paper Museum". We never seem to be able to keep up withposting the huge amounts of interesting samples we constantly receive from our "in-the-field" collectors. And NOW, an amazing collection has just been generously donated to the museum from a retired biologist who has been collecting toilet paper samples from around the world since the 1980s. So ... we are now int he process of planning add a "wing" to house this venerable collection on our site.

TagYerit gets a feature article in the Valley Advocate

TagYerit gets a feature article in the Valley Advocate

Check out this article that explores our music and our toilet paper collection. Pretty funny I hope.
The Valley Advocate
Posted by TagYerit at 10:53 PM No comments:

For this brief moment in time, press has been falling into our laps like a succession of dominoes.
After having had our toilet paper collection on the web for over 10 years, the Smithsonian Channel filmed us talking about our collection for an upcoming episode of their series "Stories From The Vaults". Using that domino, we sent out a press release. The local paper, the Springfield Union, thought the story interesting enough to feature our collection as a cover story to the great delight of many of our friends who report their first reaction at seeing our faces in color on the cover of the newspaper out on the news stands was to fall over laughing.

But they weren't the only one's to see the article. So it came to pass that Lopez from WMAS 94.7 invited us to their station for a quick interview on the collection. One cool thing about this is the location. WMAS studio is in the Basketball Hall of Fame building. For once a destination that's hard to miss - The building is in the shape of a basketball. http://www.hoophall.com
Once we got there, the first stop of course is to get some toilet paper from the bathroom so we can get Kellogg Krew D.J.'s signatures.
What should I see on entering the bathroom than this electric hand dryer in the shape of a basketball. And people make fun of our collecting obsession? Really?

Once in the studio we get to meet Chris Kellogg, Dina McMahon and Lopez. We had a fun though brief interview. I guess there's no point in holding up signed toilet paper to show a radio audience, so the listeners would have to trust that Chris, Dina & Lopez would be able to verify that there was no sleight of hand happening.
As I said, it was fun. - but our adrenaline was in overdrive and we could have gone on talking for a long time, which thankfully they didn't let us do. It's always great to see DJs at work. When they're on the mike it seems as if their brains shift into gear. They know just what to ask and when to keep it moving. From our perspective, being in front of a microphone in a radio station is almost the complete opposite experience to recording music in the studio, where everything is measured and precise. Anyway, the Kellogg Krew were great and they were gracious enough to sign some tp for us afterwards.

Posted by TagYerit at 8:31 PM No comments: 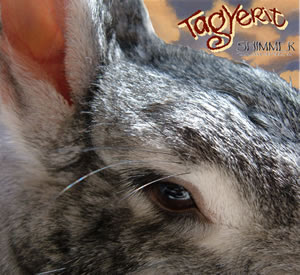